Bob van Oort, the lead author from CICERO Centre for International Climate and Environmental Research in Oslo, said: "We already know a lot about how climate affects health. However, we don't have a clear picture yet of how strongly it will affect health, and how factors like age, standards of living and the quality of health care will play in. In this review we focus on numbers and assess the costs for the economy."

The health effects of temperature increases and heat waves have been documented in many studies. Heat makes people feel tired, can lead to dehydration, respiratory diseases and kidney problems. More people are dying during heat waves, especially elderly people. It is difficult to quantify mortality however, as it is uncertain how long people would have lived on without the heat.

Heat also affects the need for services. An American study shows that during heat waves hospital admissions increase by 1,6% to 2% per degree Celsius, depending on age group. Finally, heat also reduces labour productivity by up to 20% per degree Celsius, but this varies considerably among professions. 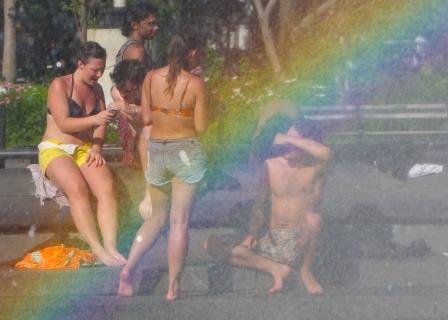 There are few studies on other direct effects of climate change, such as cold stress, changes in humidity and UV radiation. Cold stress causes cardiovascular diseases, respiratory problems and hypothermia – also long time after a cold period. Studies suggest that people in urban areas are significantly more affected than those living in rural areas. Increased radiation may have both negative and positive effects, with on the one hand an increased risk of skin cancer and, on the one hand, an increased uptake of vitamin D.

Extreme events such as flooding, storms and landslides are among the indirect effects of climate change. They all lead to an increase in deaths, trauma and infectious diseases. No separate studies were found on the health effects of forest fires, but these might cause respiratory diseases and even mortality. The effects of extreme weather events are difficult to quantify: general cost assessments of extreme events usually do not specify the health costs.

Considerable attention has been paid to a possible increase in infectious diseases due to climate change, in particular malaria. While malaria was no longer existing in Europe in 2000, by 2030 the risk of malaria will be between 1 and 1,5%, depending on the region. Also food and water borne diseases and tick bites are possible impacts.

Studies project an increase in the peak and duration of pollen season in Europe. In addition, climate change is believed to have an impact on certain pollutants, like tropospheric ozone and small particles like PM2.5 and PM10, which cause respiratory and cardiovascular diseases and lung cancer. However, science is still very uncertain about climate change and pollutants are linked, so it is difficult to assess its health impact.

Related to standards of living

To make assessments of the health impacts of climate change, one needs information about a range of factors besides the change of climate indicators and the change in the number of registered symptoms. Health impacts depend heavily on the standards of living, and may differ geographically due to habits and cultures. This is not only a question about the conditions under which individuals live, but is also subject to the quality of the health care in the society where they live.

The data gathered in this review will be integrated in ToPDad’s general, macro-economic model GRACE in the final stage of the research project.

Download the review of impacts of climate change on health and productivity in Europe by clicking on this link.